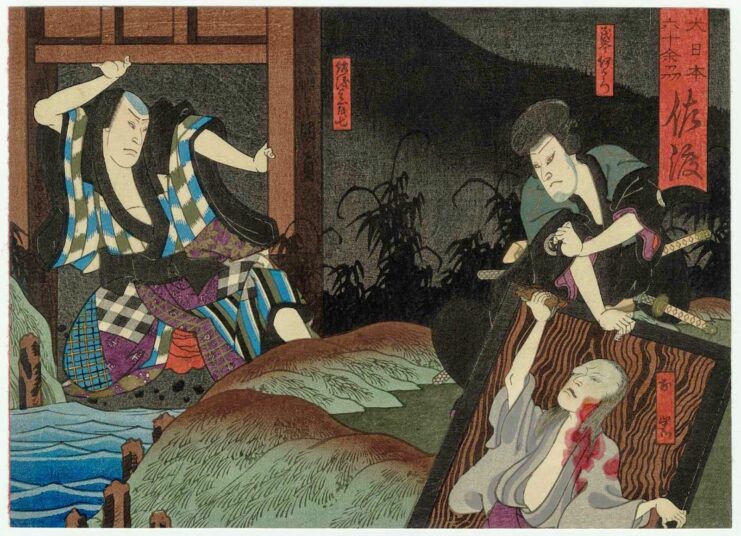 “Mom. How can I protect myself from ghosts when I meet them?” my four-year-old daughter asked me.

These days she is interested in ghosts because she enjoyed watching horror films on TV during the Halloween season. Even though she is scared of them, she still watched from under a blanket. I could see only her eyes from the blanket.

One of our famous ghost stories is the Yotsuya-Kaidan ghost story (the formal title is Tohkaidoh Yotsuya Kaidan), which was written in the Edo period, which lasted from 1603 to 1867. Japan had a closed-door policy, where craftsmen and merchants developed a unique and sophisticated culture. Townspeople of that period enjoyed their culture and amusement, including ghosts and ghost stories. I think they were curious about ghosts. They enjoyed Yotsuya-Kaidan very much, and this is the story.

About three hundred years ago (in the Edo period), a master-less samurai Iemon and his wife Iwa lived in Yotsuya in ancient Tokyo. Even though Iemon didn’t have a job, Iwa was happy because she was carrying a baby. However, Iemon was depressed due to unemployment.One day Iemon met a man who told him that he would look for job (a master) for Iemon, on the condition that Iemon would marry his granddaughter after he got a job. Iemon accepted the man’s offer and decided to kill Iwa together with the man. Iemon killed his wife, Iwa. Iemon was not happy after he carried out the plan because he was tormented by Iwa’s ghost. It appeared everywhere around him. And he would be…..

Every summer, several theater and movie versions of Yotsuya-Kaidan story are shown in Japan. The actors and crew visit Iwa’s grave before they play the story because many Japanese believe that strange, terrifying things will happen if the actors and crew don’t do that.

We call them evil consequences. I’ve heard about some of them; for example, an actress from Iwa was killed in a car accident; the stage ceiling lights suddenly fell on the stage and injured actors; one of the crew committed suicide …etc, but I don’t know if these were true or not. I think visiting her grave is a kind of a ritual, so they do this, even if they don’t believe in the evil consequences.

While I saw my daughter’s eyes looking out from the blanket, I remembered my elementary school days, when I read many ghost stories and watched ghost movies a lot. I think she is curious about ghosts just like me.

It is good for the right hemisphere of her brain to imagine, but I should say to her, “Please don’t forget to use the left-side of your brain to stop too much imagination about ghosts. It is one of the best ways to protect you from ghosts.” Maybe this doesn’t work for her right now though.