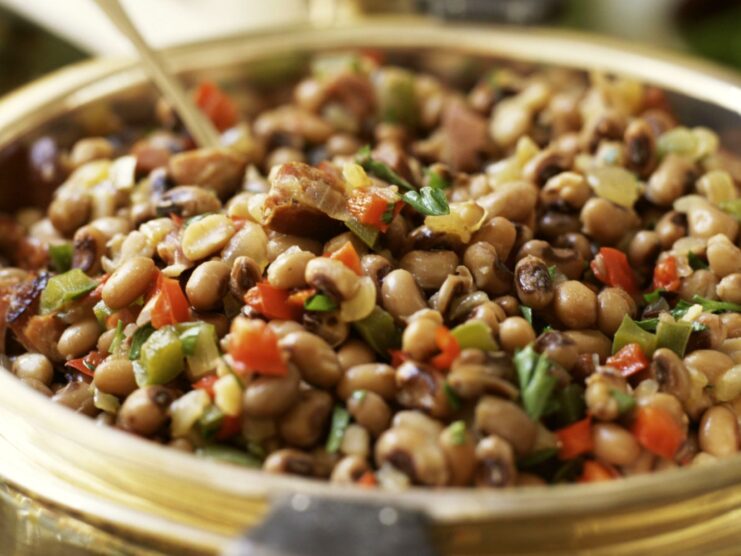 TOPICS: Could you tell us about the custom of eating black eyed peas on New Year’s Day?

John Davis: In Georgia, it’s a tradition to eat black-eyed peas and turnip greens. The peas represent copper and the greens are dollars. We say each pea you eat equals one dollar’s worth of earning, and each portion of turnip greens equals $1,000.

TOPICS: So, it brings you good luck, moneywise?

TOPICS: Thank you, John. Will you be eating them again on this New Year’s Day?

John Davis: I sure will. I always do! I cook them myself.

TOPICS: Thanks, John. We’ll be sure to eat some, too.

You need to eat 365!
John’s mother-in-law, Vera Price, who has lived in Georgia and in other southern states, adds that some people say you have to eat at least 365 black-eyed peas on New Year’s Day. That guarantees that you will have good luck each day of the the following year.

A traditional New Year’s Day meal throughout the South

This custom is traditional throughout the southern part of the United States. There are some variations; for example, in Texas and in Alabama, cabbage sometimes accompanies the black-eyed peas instead of turnip greens. The black-eyed peas are considered a symbol of good luck; and the cabbage, like the turnip greens, is considered a symbol of money. The cabbage can be prepared in any form; it is sometimes cooked and sometimes served as cole slaw—a salad made with thinly cut, uncooked cabbage.