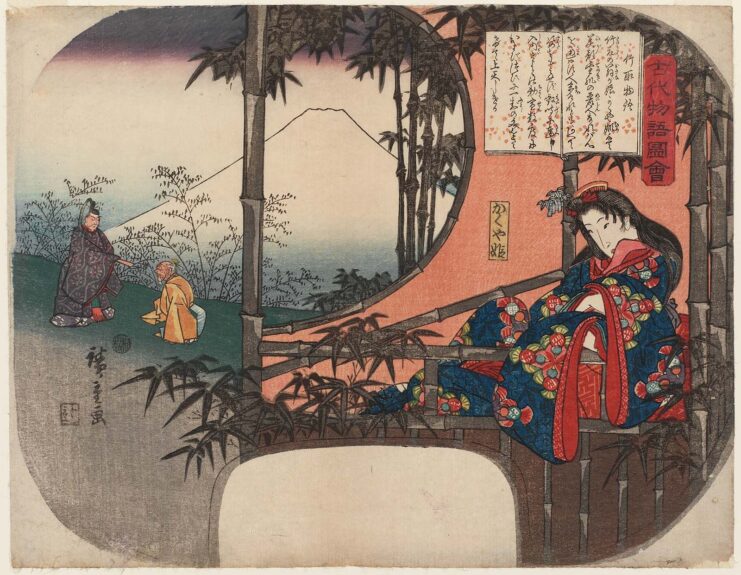 This is the story of a beautiful moon princess, but it is also a story about bamboo, a plant which was once believed to be sacred.

Once upon a time there was an old man and his wife. One day he went to a bamboo grove to collect bamboo shoots, where he found a bamboo tree illuminated in the middle part. He wondered why and then became curious about what was inside. He carefully cut the bamboo and was astonished to find a pretty baby inside. He decided to pick her up and bring her back to his home. He consulted with his wife how to handle this baby, and they made up their minds to raise this baby as a gift from God.

After several years had passed, the baby grew up and was a young and beautiful lady in the town. Everyone knew her because she was graceful and beautiful. Hearing about her reputation, there were so many gentlemen who proposed marriage to her that the old parents were now very proud of her and tried to make her choose a candidates. She, however, declined any proposal. She became very sad and was crying everyday. The old parents couldn’t understand why and couldn’t get the daughter to answer.

On a full moon night, she decided to tell why she was crying and to say she had to leave home and go back to the moon. She was frustrated for a long time because the time for her departure had come. The moon beams arrived to transport her back to the moon. She said good-bye to her old parents and gave them an elixir of life as a good-bye gift. The old parents lived a long life after that.