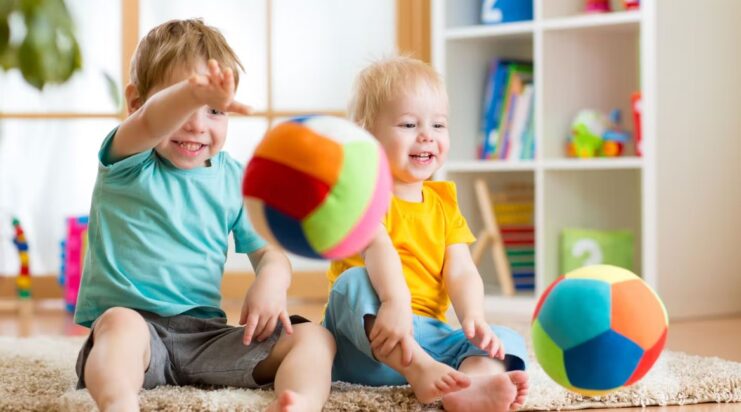 We all played simple games when we were very young. Here are three games that international students from Germany, Switzerland, and Korea played as toddlers (very young children).

Toddlers like to play with pots and pans. A pot on the head of one foot in the pot s a lot of fun!

In Germany, small children play a game called Topfschlagen (Hit the Pot). It is a lot of fun. One person is it and has to close his eyes. Somebody else puts a little present under the pot and hides it somewhere in the room.

The person who is it has to take a cooking spoon, get on the floor and look for the pot. He has to keep banging the cooking spoon on the floor. When he finds the pot, he can take the present, and someone else is it.

In Germany, all the children really love to play this game. When I was a child, we always played it when there was a birthday. It is a game for very small children. They like to play it because they get a little present.

The game is called I Spy Something. It can be played by two to five players, and lasts five seconds to five minutes.

The person who is it is the questioner and the others have to guess what object with this color the questioner has inmind. For example, he says, “I see something red that you don’t see.” So the players mention red objects in the room. (For example: “Is it the red chair?”)

The questioner doesn’t answer “Yes” or “No”, rather says the words “cold”, “colder”, “very”, “cold”, or “warm”, “warmer”, or “hot.” These words give a hint in which direction the red object is. Whoever finds out which object the questioner was thinking about is the winner.

We played this game when we were very small. One player was the wolf and stood with his back turned to the others, about five meters from the others.

The others called out “MuGungHwaggochipiubnida” and the wolf turned to face the others and shouted out. The others had to touch the wolf, but not get caught by him. If the wolf turned his face to us, then we didn’t move.

When we were children in Korea, we often played this game, and we liked it very much, but now Korean children don’t play this game anymore. Children watch videos, read books, watch movies, and do their school homework.