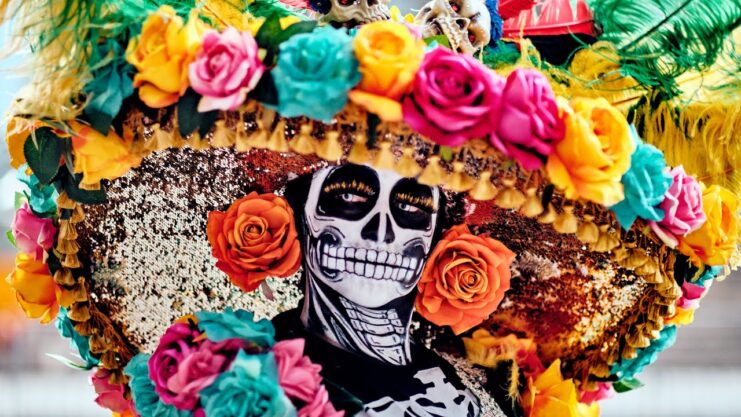 Halloween in Mexico (called Los Dias de los Muertos in Spanish) is a different celebration from Halloween in all the other countries.

Even though, it’s the day of death in Mexico, death brings laughter, and in that celebration, the Mexican people play with death, making people laugh.

The celebration includes jokes, parties, dancing, music, and a lot of delightful food.

Everyone buys smiling candy skulls with the names of the people, family and friends written on the forehead.

These skulls are made of sugar, and the children eat them like candies.

Los Dias de los Muertos is a traditional Mexican holiday honoring the dead. It is celebrated every year at the same time as Halloween and the Christian holy days of All Saints Day and All Souls Day (November 1st and 2nd).

The towns people dress up as ghouls, ghosts, mummies and skeletons and parade through the town carrying an open coffin.

The Mexican people celebrate the deceased people by making offers of food and drink (ofertas) to these dead people and making a party of death.

They make candy skulls and toys that look like skeletons, and they tell funny stories about death.

There is a saying that says: “Through the Mexicans, death makes laughter.” All the Mexicans participate in these celebrations. They are traditions in our country, and almost everyone enjoys them.