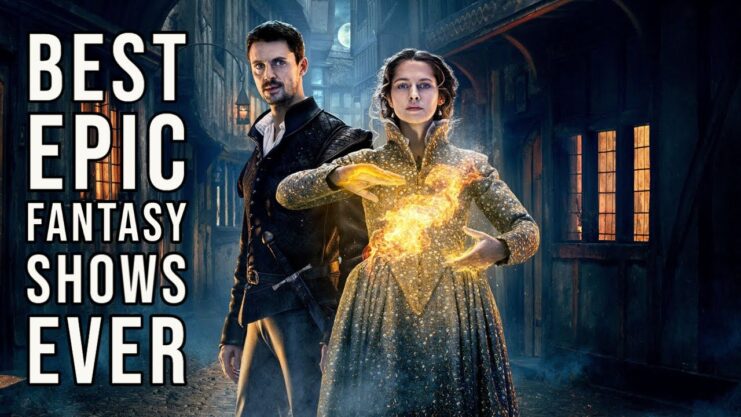 Like me, you may have felt a void in your soul since the end of Season 8 of Game of Thrones in 2019. TG, the long-awaited release of House of the Dragon is here at last, but you wouldn’t believe the number of excellent fantasy novels that aren’t set in Westeros. If you think magic and fantastical creatures are only for kids, don’t let that stop you from checking out some of the best fantasy series on TV.

To sum up, supernatural programs focus on fanciful creatures and/or magical skills that exist within the real world, whereas fantasy shows typically take place in an alternate universe. However, there is considerable crossover between the two genres. In addition, even while some fantasy shows have a brighter tone than the supernatural ones, which are nearly always dark and depressing, fantasy shows are not made for children. So there you go, critics. There have been many more epic fantasy series on television over the years besides Game of Thrones. But if you’d rather watch something more timely, I’ve compiled a list of the top fantasy shows now airing on television.

House of the Dragon

Remember how we mentioned that there are other TV series out there? And now there’s a new show set in the same universe! House of the Dragon is set about 200 years before the original series and follows the Targaryen family. The temperature rises rapidly, and I don’t just mean from the dragon fire.

One can say that the House of Dragon follows very closely the royal family of many european nations, specifically the UK. With it’s usual gossips, scandals and even entanglements within the family. You can read more about the UK royal family over at Lordping.co.uk.

The Lord of the Rings: The Rings of Power

Now that Amazon has revived the classic Lord of the Rings series, it seems like everyone is getting a prequel. Set thousands of years before Peter Jackson’s films, the program will give audiences their first look at some of Tolkien’s most iconic characters.

Travel to Mattheson, Massachusetts with the Locke family as they settle into the prestigious Keyhouse in this adaptation of the comic book series of the same name. There, they find a set of mystical keys that grants them superpowers, but they must also contend with some terrifying bad guys who want those keys for themselves.

This adaptation of Neil Gaiman’s The Sandman comics has been a long time in coming, and it has his full blessing. Get ready to follow The King of Dreams as he suffers serious repercussions for both the Dreaming and Living worlds after being imprisoned for hundreds of years.

Here at Brakebills University, only the most talented students are given the opportunity to further develop their skills at the graduate level. Now that he has the opportunity, the young man named Quinten Clearwater can finally put his faith in magic. The magical world he now inhabits is more complex than the fairy stories he was brought up on, and he learns this the hard way.

Based on the books of the same name by Leigh Bardugo, this massive series follows a young woman called Alina, a young orphan who becomes a soldier and a mapmaker, and who accidentally releases a supernatural force that may be able to end her country’s civil war. Season 2 has already been ordered, so don’t be left behind.

The Wheel of Time

The Wheel of Time is based on a book series, and like many of the finest fantasy programs, it follows a strong leader who leads five teenagers on a trip because she believes one of them is the rebirth of the Dragon who can rescue the universe destroy it. Let’s keep our fingers crossed that Season 2 arrives ASAP!

Sorcerer, outcast, and murderer Geralt of Rivia (played by the gorgeous Henry Cavill) is tasked with clearing the realm of monsters. By the way, there will be plenty more Henry to come since the show was renewed for a third season before the second season even premiered.

Outlander is a time-travel romance based on the novels by Diana Gabaldon about a World War II nurse who finds herself in the 18th century in the arms of a rugged Scottish Highland warrior. Season 6, I’m ready for you.

In this adolescent drama, five fairies learn to control their magic at Alfea, a mystical boarding school in the Otherworld. The greatest part? Season 2 has already begun!

This grim series, featuring Orlando Bloom and Cara Delevingne, explores what happens when the homelands of legendary immigrant animals are invaded, forcing them to cohabit with humans. Season 2 is finally on the horizon after a lengthy wait.

Sweet Tooth follows Gus, a young human/deer hybrid, and his reluctant guardian Big Man as they try to survive in a post-apocalyptic world. There will be a second season, so prepare to be thrilled.

Looking for a good belly laugh right now? See Good Omens, the story of a stressed-out angel called Aziraphale and a laid-back demon named Crowley who form an unlikely alliance to avert the coming Armageddon. There has never been a better moment to get on board than now, with Jon Hamm set to join the cast in season 2.

Set in 43 AD, after the failure of the Caesar’s invasion of Britain, this highly underappreciated series follows Aulus Plautius and the Roman Imperial Army as they seek to capture the legendary realm of Britannia. Though there’s been no official word on whether or not the show will be revived for a season 4, I have a good feeling about it since it’s like a bit of history with some magic tossed in.

Based on Colson Whitehead’s book of the same name, The Underground Railroad is another historical fantasy series that imagines a world in which the network of secret passages and safe houses that allowed African Americans to escape slavery in the South was an actual railroad. It’s still up in the air as to whether or not this will be renewed for a second season, but here’s hoping!

I don’t know about you, but I can’t wait for season 2 of Noughts + Crosses to premiere, which tells the tale of two star-crossed lovers in a world where white people (Noughts) are the oppressed minority and black people (Crosses) are the powerful majority.

A young lady from another planet discovers a series of unusual and probably dangerous kidnappings while searching for her missing companion in His Dark Materials, an adaptation of Philip Pullman’s epic trilogy. It’s sad that this will be the last season, but at least it promises to be a nice one.

Okay, yeah, Starz officially terminated this fan-favorite series after season 3 in 2021; but, if executive producer Neil Gaiman has his way, then season 4 will happen, since the show is set in a secret America where magic is real and a fight is raging between the Old Gods and the New.

A Discovery of Witches

What happens when a young academic who is also a witch’s descendant discovers a long-lost alchemical text in Oxford’s library? She, naturally, descends into a supernatural underworld after being called there. Now that Season 3 is out, you should start binge-watching immediately.

During the course of his investigation into a murder, the protagonist of this Brazilian fantasy series discovers a realm inhabited by mythological beings that are normally invisible to humans. A release date for season 2 has not been announced, but fans may be certain that it will eventually arrive.