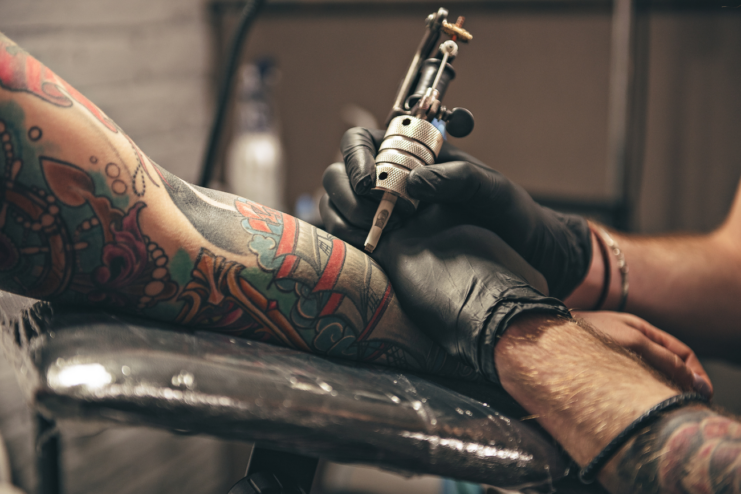 In my country, young people like tattoos very much. They have butterflies, flowers and hearts tattooed on parts of their bodies. Also, they choose very interesting zones to build marks of their youth. Almost all of them are trying to get our attention by doing it. It is just human. I’m self confident enough to get one, but what is stopping me is my fear. I’m sure it hurts. And worse, it is irreversible.

To me, it could be a kind of art. If I were not weak, I would have a beautiful small star on the back of my neck. I don’t have anything against tattoos. I don’t worry about what people are going to say about that. If my daughter wanted to get one, I would help her. The best thing in our lives is experience. When are we going to do crazy things? Just in youth when we have time and courage to change our minds.

Young people like to exhibit tattoos for different reasons, I guess. The main reasons may be to get attention and not be out of fashion or to show that they have opinions, that they are different and confident. They might want to show they are courageous because the process of getting that desired tattoo is painful. However, they are young, and when time passes, probably they will regret having done that.

Many people who don’t have tattoos have negative opinions about them. So, for those who wear tattoos, the chances are that they will be barred from some places, especially from jobs. By the way, it depends on how big it is because if it is small, nobody will notice. Returning to talk about regrets, the problem will become bigger. Since a tattoo is a permanent thing, removing it might be very difficult or even impossible.

These days, tattooing has become a kind of fad. In Korea, there are not many people who have tattoos on their bodies. Koreans have traditional thoughts about their bodies. In former days, our ancestors didn’t even get their hair and nails cut. Doing something to their bodies which were inherited from their parents was disobedient. For this reason, tattooing is not popular in my country.

Most people who have tattoos are regarded negatively. In the U.S. I have seen many people with tattoos. At first, I felt disgusted. Now, I feel it’s okay. Maybe I’m accustomed to them now, but if somebody suggested I get a tattoo, I’d reject his suggestion because I’m afraid of health risks of infection and I’m a little conservative. Sometimes, I think about sticker tattoos. My cousin uses them. Well, I don’t think it is beautiful. However, whenever I’ve wanted to change my mood, I’ve thought about using a sticker tattoo. I’m against putting real tattoos on the body.

In my country, it used to be said that tattoos make women more beautiful. Therefore, over the last decade, tattoos became the most famous fad among women in Iraq. Often girls, before their wedding eve, went to get their hands and faces covered with tattoos. But recently this custom stopped. Nowadays they prefer to use temporary tattoos instead on permanent ones. They use henna designs which last about three weeks. They believe that this kind of tattoo looks more beautiful and they can change the design at any time.

The first time I heard that tattoos were from China, I thought it was a shame. Actually, I don’t like them very much, but I don’t have anything against people having them. When you enter the army in Taiwan, the military doctors check everyone’s body. They send the people who have tattoos to the tough bases or departments, so you can probably guess how my society view people with tattoos. Nowadays, lots of young girls and women like to have tattoos on their forearms. They put flower-like icons or chain icons around their arms for decoration. After all, they don’t have to go to the army!

I think tattoos are very personal. I know a lot of people who really like them and think that they are a piece of art, or a symbol that has a great meaning. They just identify with that particular design. Sometimes it can be religious, or they need to have one to become a member of a group like gangs, for instance. These people are proud of them and nobody will make them change their minds.

On the other hand, there is a big percentage of people who just hate tattoos and feel very disgusted by them. They think that they are very bad and relate them with lower class, uneducated or criminal people. Some people who got tattoos in the past feel that they made a mistake and have experienced rejection by society. They try to have them removed. Sometimes that can be unsuccessful because of time or because the type of ink the “artist” used can be very hard to remove. Anyway, I don’t like tattoos even though I have seen very beautiful ones. I am not attracted to them, and I hope my kids won’t get any…I would die!

Nowadays, tattooing is very popular among teenagers. I think it is a kind of fad or fashion. I have a friend who has a tattoo on his forearm. He told me he likes this drawing; that’s why he decided to get a tattoo. Most parents in my country don’t allow their sons or daughters to get a tattoo because they believe that tattooing is some kind of unusual fashion that only bad people have. if we think about the future, no company wants to recruit people who have tattoos on their bodies.

Personally I think not everyone can have a tattoo, and the person who can get one can’t have all the styles. What I mean is the physical complexion has a lot to do with it. A tiny person would look bad with a big tattoo, and a girl doesn’t look better with a chic tattoo on her arm. I only know some people with tattoos, and they were sailors who got tattoos on their bodies of eagles, girls, names of ships, roses, girlfriend’s names and holy images because it was a way to remember them or to distinguish themselves as sailors. Now, I think tattooing is a new fad in society.

Teenagers want something that proves they do not agree with society’s rules. They want something different. What I think is that they should think twice before having something tattooed on their bodies. They could be barred from places or jobs because of that, especially because people still think of people with tattoos as criminals and lower-class members of society.

If parents want to discourage their kids from getting tattoos, they have to show their kids how dangerous it could be. Chances are, with a good education and most important good communication between parents and children, this will never happen. I personally like how some girls look with a tattoo on their arms, especially the one that is like a chain, or some small tattoo on their ankles. I think this is a kind of fad that is likely to pass, but not vanish. Although not all people would like to have one, there will always be someone who will want to have a tattoo.

I don’t like tattoos and body piercing. In my country, body piercing is done by popular singers and artists who like different and exceptional things. I think tattooing for young people should be banned because they are still growing right now, and tattoos can affect their health and skin. Many countries, including the U.S.A., urge that underage youngsters not be allowed to get piercings and tattoos.

Young people can’t get them without parental consent. People feel differently about tattooing and piercing. I my opinion, a really beautiful picture drawn on the skin doesn’t look good. I’m not ignoring youth’s new life style, but I’d prohibit my children from getting tattoos and abnormal piercings such as eyebrows, nose, tongue and navel piercings. Also, something which I’m worried about is that criminal groups like gangsters usually have tattoos. Some gangs indicate they are a member of a group by getting a special-shaped tattoo, so youth might be apt to join bad circles.

In my country, a long time ago, low-class men used to sport tattoos on their arms. I’ve never thought about it, but now I realize how ridiculous these tattoos were because they could be a Christ, the Virgen of Guadalupe, a nude woman, or a rose. Can you imagine that? Today, tattoos are a fashion, and a lot of teenagers want to have one or more. In fact, I’ve seen some girls with ankle designs or tattoos on their mid-rifts. Also, there are actresses who wear tattoos, some of them in places of the body not visible. I don’t like tattoos, maybe because in my mind, I still have the idea that tattoos are for low-class men.