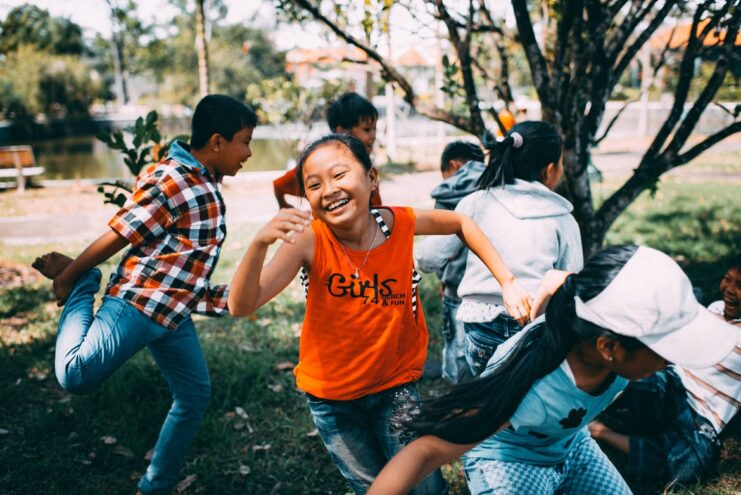 International students from Mexico and Thailand remember how they played jacks when they were children.

In some games, sticks or stones are usually tossed into the air. Then the fun begins. These games have been played over the years by children everywhere, and most of them are still popular today. In Korea, the whole family – children, parents, and grandparents like to play a game with four sticks on New Year’s Day.

In Nepal, young boys toss pointed sticks into the air and tried to catch them.

In Korea, young girls play a game of jacks, tossing small stones onto the ground, throwing a ball up in the air, and trying to pick the stones up before catching the ball.

Yut, A Game Played on New Year’s Day in Korea

This is a traditional game in Korea. There are four sticks, each one made of wood and about 15 centimeters in length. The sticks have two sides; the upside is rounded and the downside is flat.

Before the game starts, people have to divide into teams; usually, two to four teams work best. Then we draw a very simple game board on white paper. It’s easy to draw. Just draw 7 small circles or points so it looks like an x-shaped square. A point on the lower right side of the game board is the starting point and a point at the opposite lower left side is the endpoint. To win this game, you have to get the most points and arrive at the endpoint first.

In Korea, we play this game on New Year’s Day. On that day, all of the family and relatives get together and play this game. Usually, we have divided into three teams and the oldest grandmom is the judge. We bet some money on who will win.

We enjoy the game. If one team wins, that team gets the money, but they have to buy some food or drinks for everybody. I think playing this game is a very good way for people to stick together without considering the differences in people’s ages.

There are a lot of games that we would play when we were young. As far as I can remember, I used to play the game called Dundi Biyo quite often with my friend. Sometimes we would skip school and play this game all day long.

This game requires two straight sticks. The main stick is about 24 to 30 inches long, and the other one is about 6 inches with both ends pointed. It is played by tow or more people in an open field.

We decided who would start the game by throwing the small stick. Whoever threw the furthest started the game. A small hole was dug in the ground, and a small stick was placed on tip of the hole.

The game is dangerous because you might get hurt if you are hit by a stick while playing, so you have to be very careful, and it must be played in an open field.

This game is for girls. When we were little girls, we used to play this game at break time or lunchtime in the classroom. There were two ways to play the game.

In one way we used five small stones. First of all, we threw all of them down on the floor. Then you picked one up with your fingers and tossed it into the air. You had to pick another one up and then catch the one you threw in the air. Then you picked each of them up in turns.

In the last step, you tossed the stones into the air and caught them in the back of your hand. You had to snatch them off and try to catch them in your palm. The number which you caught was your score. After that, you started over. If you failed to catch them, it was your partner’s turn.

The second way we played, we used 100-200 stones. We put them all together and tried to make groups. If you succeeded in catching them, they would be yours.

When we played this game, we used our fingers. According to some researchers, moving your fingers helps develop your brain, so I think this game is very good for children.

If you want to learn more information about traditional children’s games you should check out topics-mag.com.