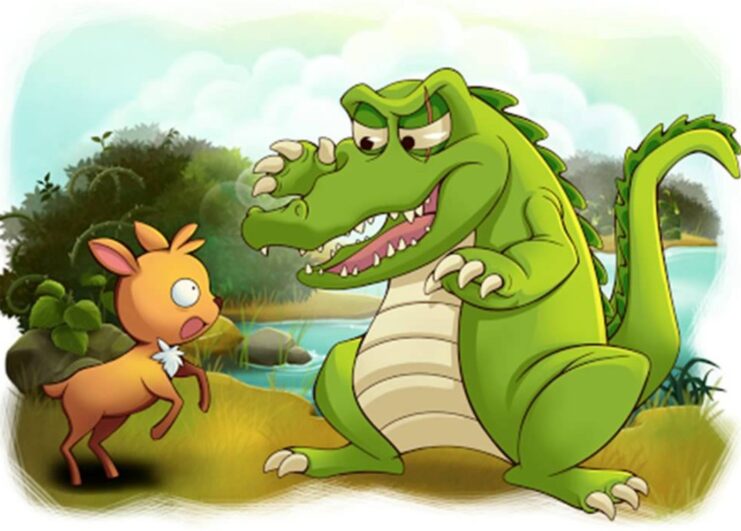 Sang Kancil is a clever, tricky mouse deer who is always finding himself in predicaments with animals that want to eat him or harm him, but he cleverly manages to escape each time. In this story, Sang Kancil outwits a big, bad crocodile.

The mouse deer outwits the crocodile. He stepped on each crocodile, counting each one, and finally reached the other side of the river.

Sang Kancil was a clever mouse deer. Whenever he was in a bad situation, he always played a clever trick to escape. In this story, Sang Kancil outwitted Sang Buaya, a big, bad crocodile, who wanted to eat him.

There were many trees where Sang Kancil’s lived along the river, so he never had trouble finding food. There were always lots of leaves. He spent his time running and jumping and looking into the river.

Sang Buaya, the big bad crocodile, lived in the river with other crocodiles. They were always waiting to catch Sang Kancil for dinner. One day when Sang Buaya was walking along the river, he saw some delicious fruit on the trees on the other side of the river.

Sang Kancil wanted to taste the tasty-looking fruit because he was a little tired of eating leaves. He tried to think of a way to cross the river, but he had to be careful. He didn’t want to be caught and eaten by Sang Buaya. He needed to trick Sang Buaya.

Sang Kancil said, “Of course, I am afraid of you, but the king wants me to do something. He is having a big feast with lots of food, and he is inviting everyone, including you and all the other crocodiles. But first, I have to count all of you. He needs to know how many of you will come. Please line up across the river, so I can walk across your heads and count all of you.”

Sang Buaya was excited and left to tell the other crocodiles about the feast with all the good food. Soon, they came and made a line across the river. Sang Kancil said, “Promise not to eat me because or I can’t report to the king how many of you are coming. They promised not to eat him.

Sang Kancil stepped on Sang Buaya’s head and counted one. Then he stepped on the next one and said, “Two.” He stepped on each crocodile, counting each one, and finally reached the other side of the river. Then he said to Sang Buaya, “Thank you for helping me to cross the river to my new home.”

Sang Buaya was shocked and angry. He shouted at Sang Kancil, “You tricked us! There is no feast, is there?” All of the crocodiles looked at Sang Buaya angrily. They were angry because he let Sang Kancil trick all of them.

Sang Kancil loved his new home on the other side of the river because he had a lot of tasty food to eat. Poor Sang Buaya was not so lucky. After that, none of the other crocodiles ever talked to him again.