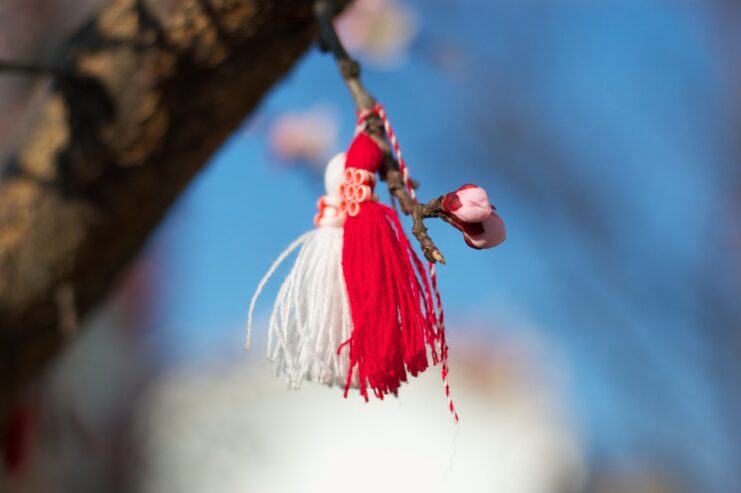 Rositsa Ruseva is a student in journalism at Shumen University in Shumen Bulgaria.

Sometimes people tie Martenitsas to the branch of a tree or bush to leave there. You can find the Martenitsas hanging there in the branches as you walk outside.

For more than 1,000 years, we in Bulgaria have celebrated our national holiday on March 1st called ‘Baba Marta,’ Grandma March. ‘Mart’ Bulgarian is the name for the month of March. This holiday symbolizes the coming of spring.

Bulgarians wear a small special ornament made of red and white yarn on this day, called ‘Martenitsa.’ We wear it until March 22, and some people wear it until they see a stork or the first buds of a tree.

Some like to wear the Martenitsa around their wrists. Sometimes people tie it to the branch of a tree or bush to leave it there. You can find the Martenitsas hanging there in the branches as you walk outside.

The belief is that if you wear the Martenitsa, Baba Marta will help you, and spring will come more quickly. People often give a Martenitsa as a gift to a friend or relative.

The tradition comes from the following legend:

Khan Asparuh, the first Bulgarian king, had a sister called Huba. She was held captive in another kingdom. Asparuh sent a message to his sister that he had found a land where they could settle down south of the Danube River, a place that nowadays is Bulgaria.

When Huba got the good news from her brother, she managed to escape from captivity and run away. She rode on horseback without stopping until she reached the Danube River. She looked for some way to cross the mighty river but couldn’t find a ford to pass across. So then she tied a thread of white yarn to one of the legs of a falcon sent by her brother and let him fly up into the air, holding the other end of the thin thread in her hands.

The falcon flew away to find a ford for passage across the river and just then, when he found a place, an arrow shot by an enemy pierced the falcon, and he fell to the ground dead. The yarn became red from his blood. Huba followed the thread she was holding and so she found the way to cross the great river and reach the country where her brother Asparuh had made his new home. Then they lived free and happy in the new land they called Bulgaria.

That day was March 1st, the new year in the tradition of those times. They called the white and red threads of yarn after the name of the month March, and named it ‘Martenitsa.’

The Martenitsa became a symbol of peace and love, health and happiness. The white color symbolizes purity and honesty in relationships, and the red color means life, passion, and cordiality in friendship and mutual love.

Since that time the red and white threads of yarn have come to symbolize the strong bond among Bulgarians around the world.

This special national holiday on March 1st reminds us of the values which the Martenitsa has carried down through the centuries.

And all Bulgarians everywhere wear it as an ornament on this special day, and for three weeks after that, until spring begins.

Take a look at more posts about traditions and games on topics-mag.com.