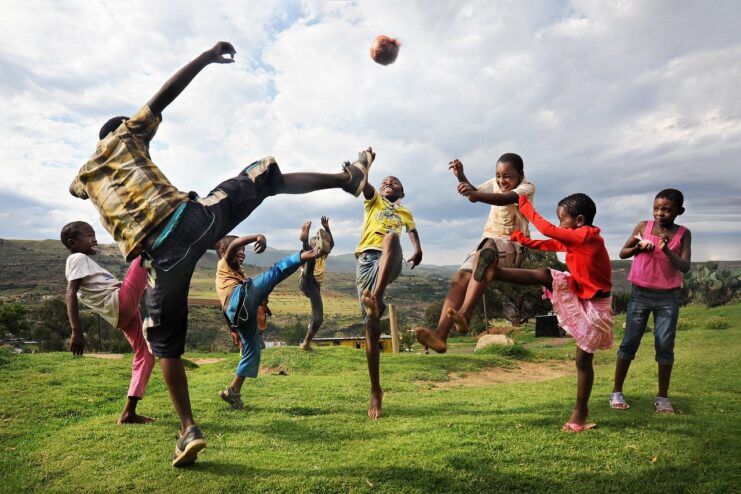 In countries around the world, children love playing games with balls. Playing these games, they learn to handle the ball in different ways and develop special skills. In the process, they have a lot of fun.

I remember when I was a child and I played a popular game called Oba with my sisters and friends. This is a fun game, which is played with a ball. We took the ball and tried to throw it up against the wall, but when we did that, we had to make different movements and sing a song about the game.

That showed our ability to handle the ball in different ways—with one arm, with both arms, throwing the ball and trying to catch it turning around, with our arms behind us, standing on one leg, or jumping.

When we were playing this game, we laughed all the time, especially when some of us missed the ball. I enjoyed playing it a lot, so I was always waiting for my classes to finish. Then I would hurry to do my homework in order to play with my friends all afternoon.

I think this game is one of our traditional ways of having fun when we are children. It’s part of our culture, and children play it all over the country.

When I was a child, I used to play many games outside like hide and seek and marbles, but the game that was the most fun was a game called Keep the Ball. Once a year, we used to visit my father’s family in a very small town in Sinaloa. My sister, brother and I spent every afternoon of our vacation playing all kinds of games with our cousins, but the game we always preferred was Keep the Ball.

How to Play It

To play this game, you form two teams. There is no limit on the number of players. It’s played with your hands and sometimes with your feet. You play with a soft ball and before the game, you decide the rules: for example, the time of the game and the size of the field.

The game starts when somebody throws the ball up to the sky. The player who catches the ball has to keep the ball for his team. He has to throw the ball to his partners and each person on the opposite team has to try to ‘steal’ the ball. You can’t return the ball to the person who gives it to you. When the time is up, the team that has dept the ball wins.

Keep the Ball is a game that keeps you moving all the time, and I enjoyed it because we laughed a lot, especially when some of us didn’t catch the ball.