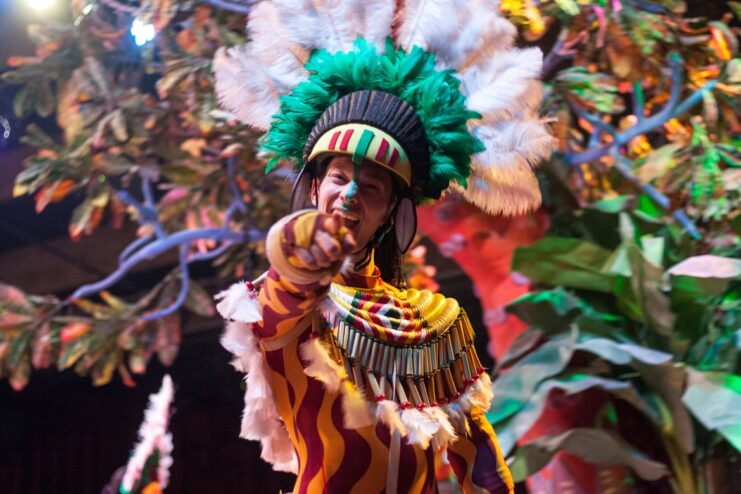 Wearing a costume is part of the fun of Carnival in Brazil.

Carnival is the most famous holiday in Brazil. It is not about a big moment in history or about a famous person, but it is important for the people because it’s a time of camaraderie, freedom, and almost a whole week without work.

People can choose between parties or rest, and most people choose parties, day after day, night after night.

It starts forty days before Easter. It’s based on the Christian calendar, but it isn’t approved by the Church very well.

It lasts four days and four nights. It starts on Saturday and finishes on a Thursday. People put on their costumes and go out into the streets or to clubs.

There are also the Samba schools that make a parade showing their music, fantasies, and allegorical cars. They are followed by the people. Every year the parade tells a different story. Each city has one or more schools like this.

Carnival is celebrated in the south where by Wednesday everything comes back to normal. The problem is that it is not approved by the church in the Northwest where carnival is more traditional. These people don’t respect its end and continue to party until the next Sunday.

I like Carnival, but I don’t agree that the party should keep going on. And, like at every other popular party, people drive, dance and have fun. Unfortunately, some people aren’t conscientious and give it a bad name, leaving a bad impression of this holiday, but it is the only national holiday that moves all the country and its different kinds of people and cultures together.

Take a look at more traditional festivals, or games at topics-mag.com.